Where is better Vietnam or Cambodia? -If you would like to spend some time relaxing on the beach at the end of your tour, it is recommended that you go to Vietnam rather than Cambodia because Vietnam will provide a better experience and will give you more bang for your buck. Beachgoers in Vietnam have spoiled for choice thanks to the country’s expansive coastline, which stretches from north to south.

Major differences between Vietnam vs Cambodia – which to visit 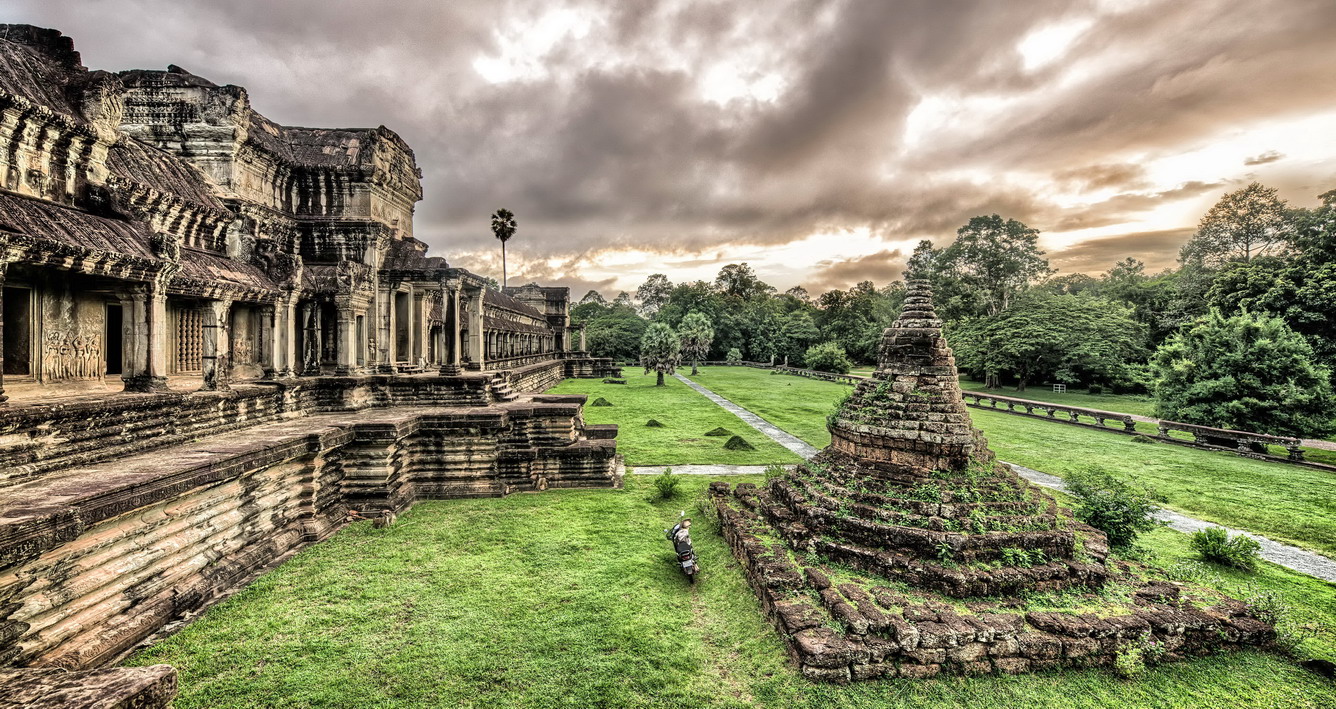 Have you encountered these concerns while organizing your trip to Asia?

Vietnam and Cambodia are two of Southeast Asia’s most visited countries. If you have enough vacation time, we highly suggest going to both (12-14 days). Due to their proximity and the fact that they are both relatively small countries, these two locations make an excellent vacation package.

But if you’re pressed for time and have to choose between the two, which should you go with? You’ll find the 13 most notable variations listed below.

If you are interested in visiting historical sites, religious sites (Angkor Wat), wildlife (elephant sanctuaries), and temples (Angkor Wat), then Cambodia is the place for you.

If you want to see a wide variety of things, from natural wonders (Halong Bay) to colonial history (Ho Chi Minh City) to ancient towns (Hoi An) to modern city life (Ho Chi Minh) to floating markets (Mekong Delta), then Vietnam is the place for you.

For the traditional trip, tourists spend 8-10 nights in Vietnam and 3-4 in Cambodia (only Siem Reap).

China, France, and Japan all had colonies in Vietnam at one time or another, so it’s no surprise that their influences can be seen in the country’s cuisine, art, and architecture today.

Vietnamese people observe the same Lunar New Year as the Chinese do.

You can visit many of the temples and meeting halls that the Chinese community built during their time in the country (mainly from Fujian and Guangdong).

Sapa (northeast Vietnam) has a culture not dissimilar to that of Yunnan (southwestern China).

There is a wide variety of cuisines available in Vietnam, from French to local street food.

The French language is more widely spoken in Vietnam than the English language.
Cambodia has been subject to less external influence than its neighbor Vietnam. Significant contributions have been made by Indian theology, and it may have even been influenced in its early stages by Indian culture.
Religious fervor is widespread in Cambodia (mainly Buddhism and Hinduism). You can’t go far in the country without coming across a temple. The Khmer had a brilliant ancient civilization, and Angkor Wat, their most famous monument, is a representation of that.

See also  How to Move in Vietnam: the Complete Guide

The Vietnamese and Cambodian languages are both recognized by the government as legal documents. Since tourism is Cambodia’s main source of revenue, English has replaced Khmer as the language of choice.

Both countries’ native speakers are likely to speak with a heavy accent, so be ready for that. In March of this year, I took a trip to Vietnam and hired five different guides to help me get around. Two of them spoke English with an accent, but the rest were all native speakers (they still could be understood). We used Google Translate to talk to locals when we were in the villages without a guide. In general, Cambodians have a higher proficiency in English than the general population.

Vietnam uses the Dong (VND), with $1 translating to roughly VND23,000.
The official currency of Cambodia is the Riel (KHR), which is equal to 4,100 U.S.
The Vietnamese Dong
Funds in the Vietnamese Dong

Dong is the de facto currency of Vietnam, with the US Dollar being widely considered a foreign currency. You can easily exchange your US Dollars for Vietnamese Dong at the airport or any of the jewelry shops lining the streets of Vietnam. ATMs also make cash withdrawals quick and easy. Standard credit cards like Visa and Mastercard are accepted.

The climate in Cambodia is consistent everywhere you go.

Northern Vietnam is typically 2 to 3 degrees cooler than southern Vietnam due to the country’s topography (especially in Sapa).

The ideal time to visit either of these countries is very similar. The months of November through February are the most agreeable for travel (not too hot or too cold).

A few words of advice: the period between December 24 and January 2 is the busiest. Costs for things like lodging, transportation, tours, and plane tickets typically increase by a factor of two or three during this period. We recommend planning for at least three months to guarantee availability and get the best possible rates when making reservations.

From June through October, you can expect rain. There is a chance of showers during this time, but it shouldn’t dampen your sightseeing plans too much. Generally speaking, travel costs are lower and crowds are smaller during the wetter months. Cities in central Vietnam, such as Hoi An, may experience flooding in September and October.

In July and August, typhoons have the potential to disrupt or cancel Halong Bay cruises. The summer season is not typically prone to tropical storms.

If bad weather is predicted for Halong Bay, your cruise line or travel agent will let you know at least two days in advance if your trip will be canceled or altered. If you’re looking for an alternative to Hanoi, Ninh Binh is a good option (it’s only two hours away by car and also features the renowned Karst landscape).

Duration of a typical visit

Most itineraries spend more time in Vietnam than in Cambodia because there are more well-liked attractions in Vietnam.

Our standard recommendation for a trip to Vietnam is 10 days. It is common practice for trips to cover the entire country, including:

Hanoi and Halong Bay, up north

Hoi An, in the middle

The southern region, including the Mekong Delta and Ho Chi Minh City

The ancient royal culture of Vietnam can be experienced in Hue (1-2 nights) or the terraced fields and minority villages of Sapa (2-3 nights).

Hotels in Vietnam are cheap when compared to other Asian countries. Generally speaking,

A night at a 4-star hotel in the area will set you back about $US60.
The going rate for a room in a 4-star international hotel is close to $100 per night.
While the number of 5-star hotels is smaller in the Mekong Delta and Sapa, finding one is still not difficult.

E-visa applications are the quickest and easiest way to enter Vietnam if you are a citizen of the United States of America or Canada or any country not on the above list. It’s possible to accomplish this by applying to cyberspace. The visa application process typically takes 3 business days and costs USD 25.

There is a 30-day limit on how long an e-visa holder can stay in the country after entering. Visa on Arrival or the Vietnamese Embassy must be contacted for longer stays or multiple entries into Vietnam.

Either a Visa on Arrival or a Single Entry Visa (valid for 30 days) can be obtained online before entering Cambodia (around USD30).

You’ll need the following paperwork to apply for a Visa upon Arrival.

You only need one visa application form, completed, to enter the country (fill out on the plane or at the airport)

Valid passport for a minimum of 6 months.

Vietnam is a better option than Cambodia if you want to end your trip with some beach time because it offers a more satisfying and cost-effective experience.

From north to south, Vietnam’s coastline is replete with opportunities to relax on stunning beaches. Phu Quoc, Nha Trang, and Danang are some of the best beaches in Vietnam.

Phu Quoc is our favorite Vietnamese island because of its beautiful sunsets, high-quality hotel options, pristine beaches, and relaxed vibe. If you’re looking for a place to get away from it all, the city, this could be a good choice.

Nha Trang and Danang also have nice beaches and facilities, but they attract much more Chinese and other Asian visitors.

Sihanoukville boasts Cambodia’s best and most well-known beach. Once pristine, it is now inaccessible due to a lack of flights from major cities like Ho Chi Minh City, Siem Reap, and Phnom Penh.

See also  Where to Go in Vietnam ? Is-it-better-to-visit-north-or-south-vietnam?

Travelers from all over the world flock to Thailand for its famous beaches. After the main sightseeing is done, why not take a short flight (1.5-2 hours) to Phuket or Koh Samui and relax at a beach resort for a few nights?

Cambodia is an exciting and animal-rich destination.

Do you want to see dolphins, visit elephant sanctuaries, go bird watching, or hang out with gibbons? Not a problem at all; Cambodia is home to a wide variety of exciting wildlife encounters. The Eco-Tours we’re organizing in Cambodia would love to have you join us.

The fresh ingredients and satisfying flavors of traditional Vietnamese pho have made it a global phenomenon in recent years. To get your day off to a good start, we suggest having some Pho for breakfast.

A Bowl of Pho from Vietnam

You can choose from a wide variety of beverages in Vietnam, such as fresh juice, beer, coffee, and tea. The most well-known variety of Vietnamese coffee is prepared with a slow drip filter and sweet condensed milk. You should also try the civet cat coffee that Vietnam is known for if you are adventurous.

There are many different cultural influences in Cambodian cooking, which results in a cuisine that is both flavorful and diverse. In many cultures, rice, vegetables, and fruit are staples in the kitchen. Fish Amok, Lap Khmer, and Nom Banh Chok are just a few examples of classic Khmer dishes.

Fruit juices and one-of-a-kind beers made in Cambodia are famous around the world. Due to its history as a French colony, you can also find an abundance of tea and coffee.

Asia Highlights will provide you with iced bottled water to help you stay refreshed during your trip and will suggest the best local restaurants and bars for your free time.

Getting to Southeast Asian countries from the Americas or Europe requires a stopover in either China, Japan, Singapore, or South Korea due to the flight’s length (around 20 hours). Traveling to Vietnam and Cambodia from other Asian countries like Thailand, China, and Singapore is now very easy due to the growth of the tourism industries in those nations.

Both Ho Chi Minh City and Hanoi Airports are significantly larger than those in Cambodia’s capital, Phnom Penh, allowing for more international flight options from Vietnam.

Hanoi is reachable via weekly nonstop flights from London and Frankfurt.
The flight time between Vietnam and Cambodia is under 2 hours, so you can easily fit both countries into your itinerary.

Spending USD180-250 per day (including hotels) is enough to have a fantastic time in Vietnam, including having access to a private car and guide.

It is safe to travel to either country, but as with any international destination, you should take precautions to safeguard your belongings.

Even though Vietnam and Cambodia are generally safe countries, tourists should be aware of the risk of petty crimes such as theft and scams in busy tourist areas.

Don’t believe strangers who offer you incredible deals just to get your trust. Seek out reputable travel agencies. You should only ever use licensed taxis and transportation services.